Lego. They have invaded my subconscious mind. Recently I’ve been somewhat consumed with all things Lego. Whether in the form of Star Wars Lego sets or working on custom projects, I’ve got Lego everywhere I turn. My basement is slowly being overtaken by multiple projects.

I think this Lego play has seeped into the nooks and crannies of my brain. A couple of nights ago as I was I was playing with my phone in bed, the idea struck of making something Lego for my phone. I was half-conscious at this point so things are pretty fuzzy, but I passed out with Lego and Evos on the brain.

When I awoke the next morning the first thought I had was “Lego phone cover!” I had not conceptualized anything at that point and had no idea what I planned to do but the seeds were sown. I went downstairs and rounded up some spare pieces and started playing with my phone. It was somewhere around that point that I thought it would be so cool if I could have a Lego phone case. I went online and searched and searched. Alas, I found nothing.

Given the lack of Lego related Evo paraphernalia I figured my only option was to make something myself. I first thought I would make a battery door of just Lego. The attachment of this fantasized Lego battery door quickly proved problematic. I then remembered that I still had my old original HTC battery door. It was pretty thin and seemed like the perfect base to build from. 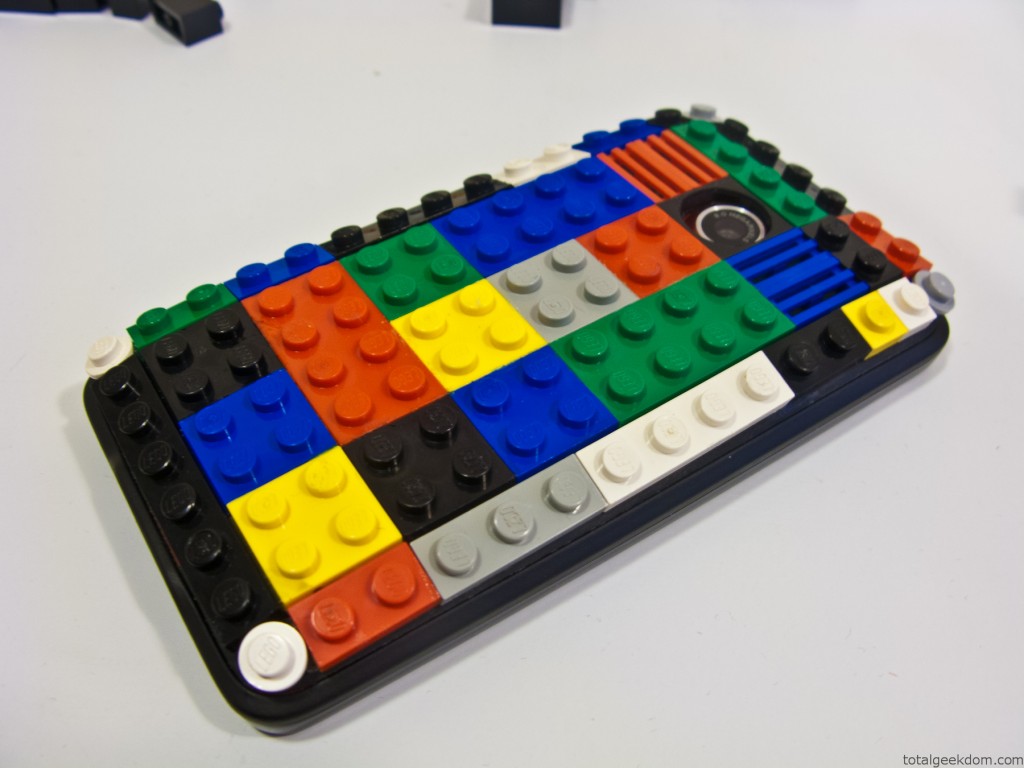 My thoughts turned to how to go about attaching the Lego pieces to the battery door. I thought of super glue, but I feared that it would not hold up over time. I hopped online and did a little research about the plastics used in both the battery door and the Lego. Then a little more research and I found what seemed to be my answer, plastic cement. Similar to the stuff used in PVC plumbing. It essentially “melts” the plastic together and bonds the pieces by “melting” the two outer most layers of plastic and fusing them. Perfect! A quick run to my local hobby store and I was in business.

After some assessment into the battery door cover I determined the thin rubbery coating on the back of the door had to be removed so I could get a solid plastic to plastic bond. I busted out the sandpaper and went to town. After all the rubbery coating was sanded off I used some alcohol to clean it. 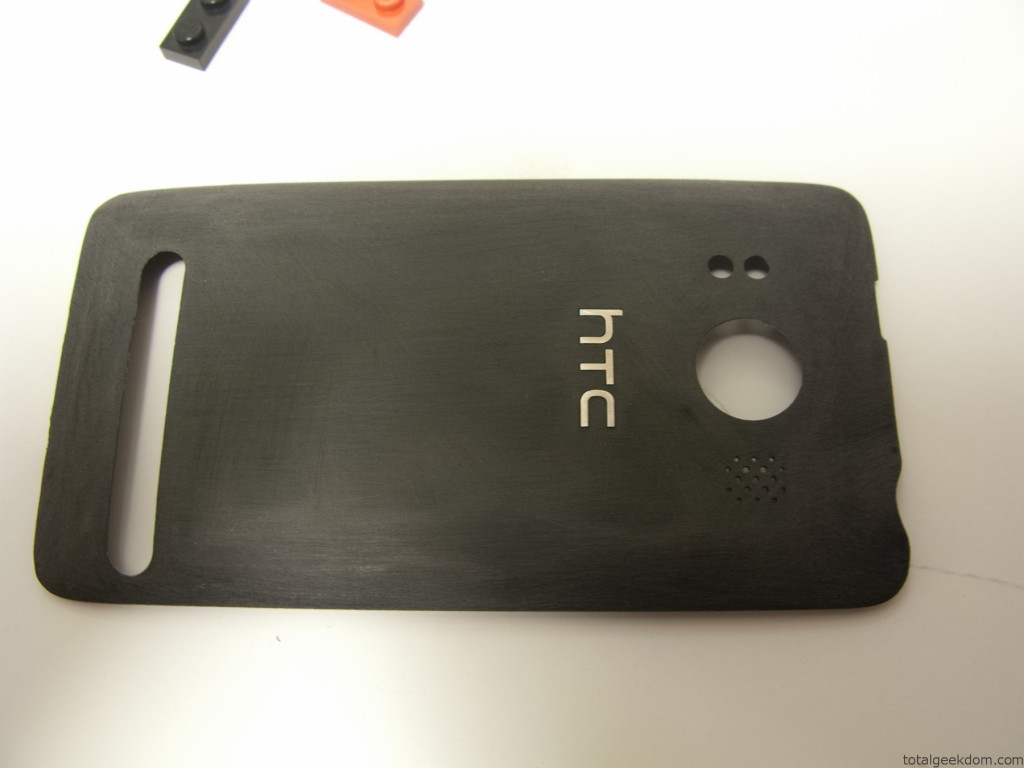 I moved next to determining my basic layout and color scheme. I rounded up some random pieces from around the house. After taking some measurements it looked like I had something that would work. Using a set of calipers I made some markings on the battery door to ensure everything would fit nice and neatly. From there I took each piece and started applying the plastic cement and bonding them to the cover. 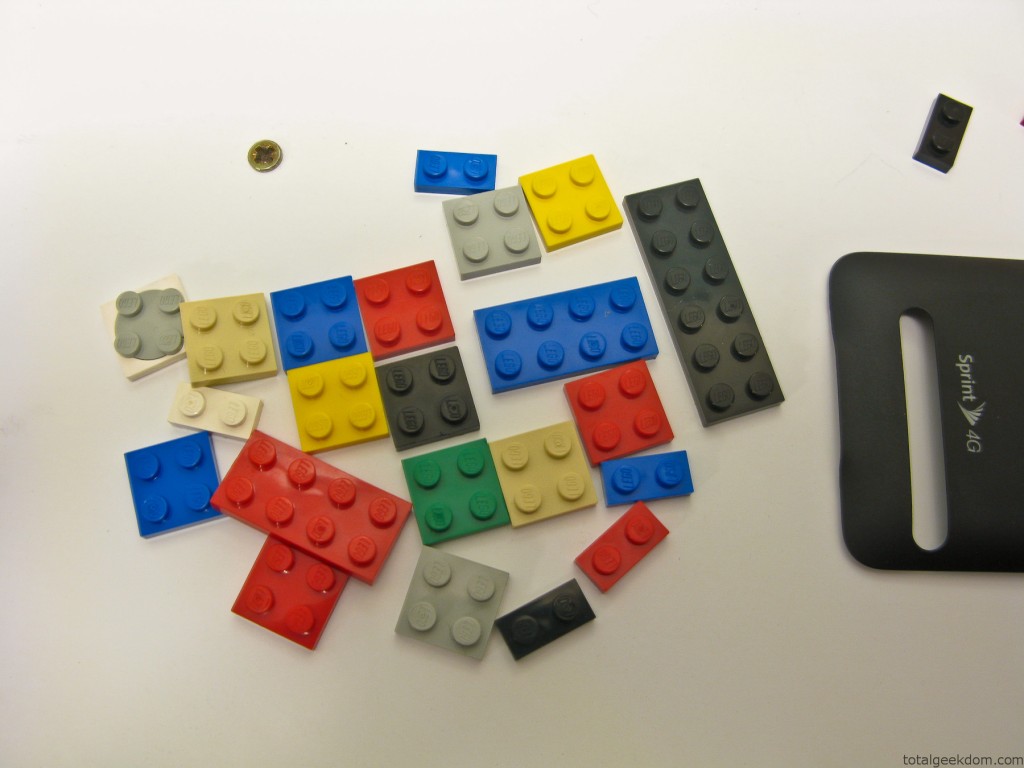 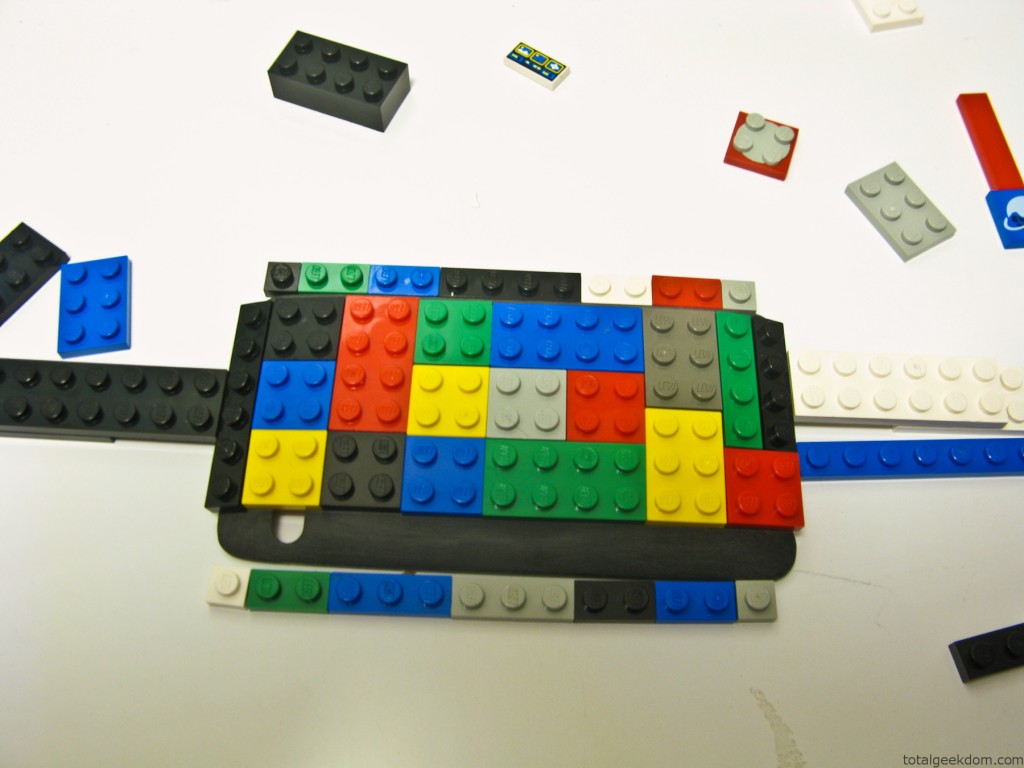 When I got to the camera, speaker and flash area I had to use a couple different specialty Lego pieces to make it work. The flash and speaker areas were accommodated with small grills to allow both light and sound through. For the camera lens I used a standard 4 square piece with a spinning center section. I cut out the center spinning section and was left with a perfect hole for the camera lens. 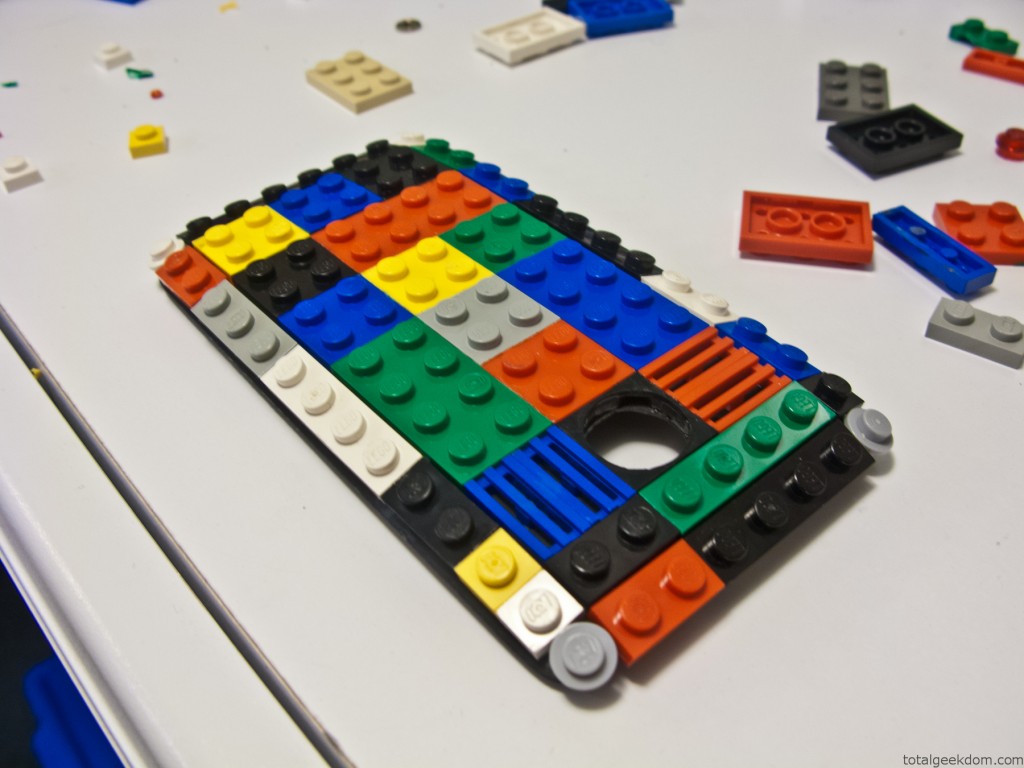 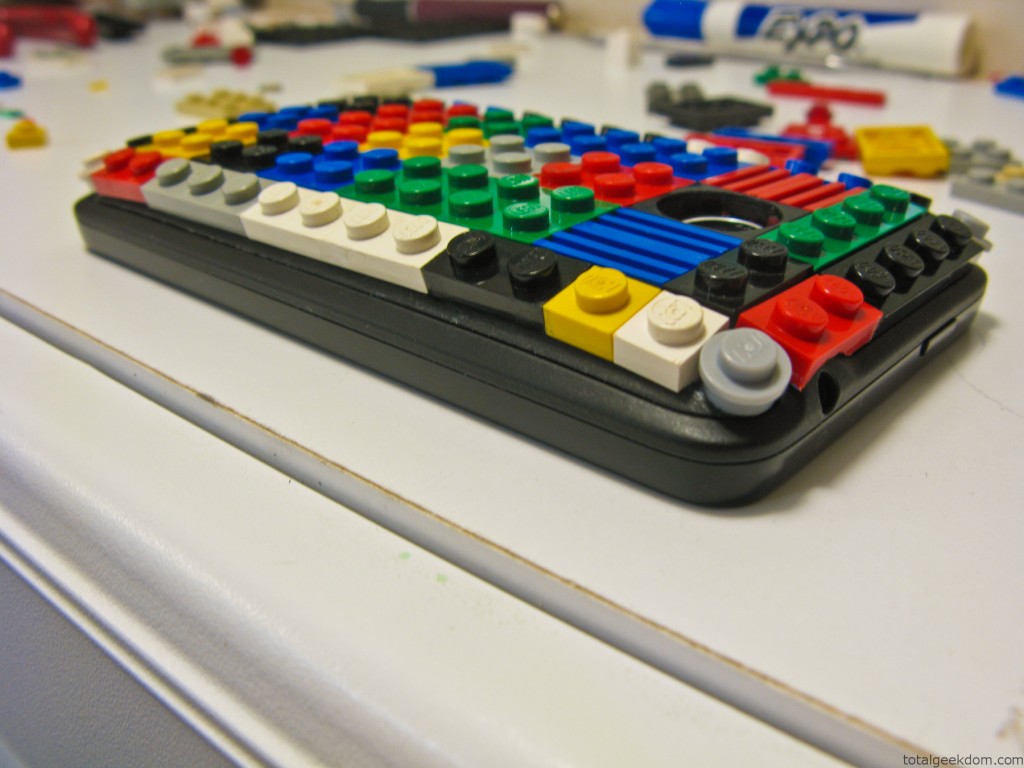 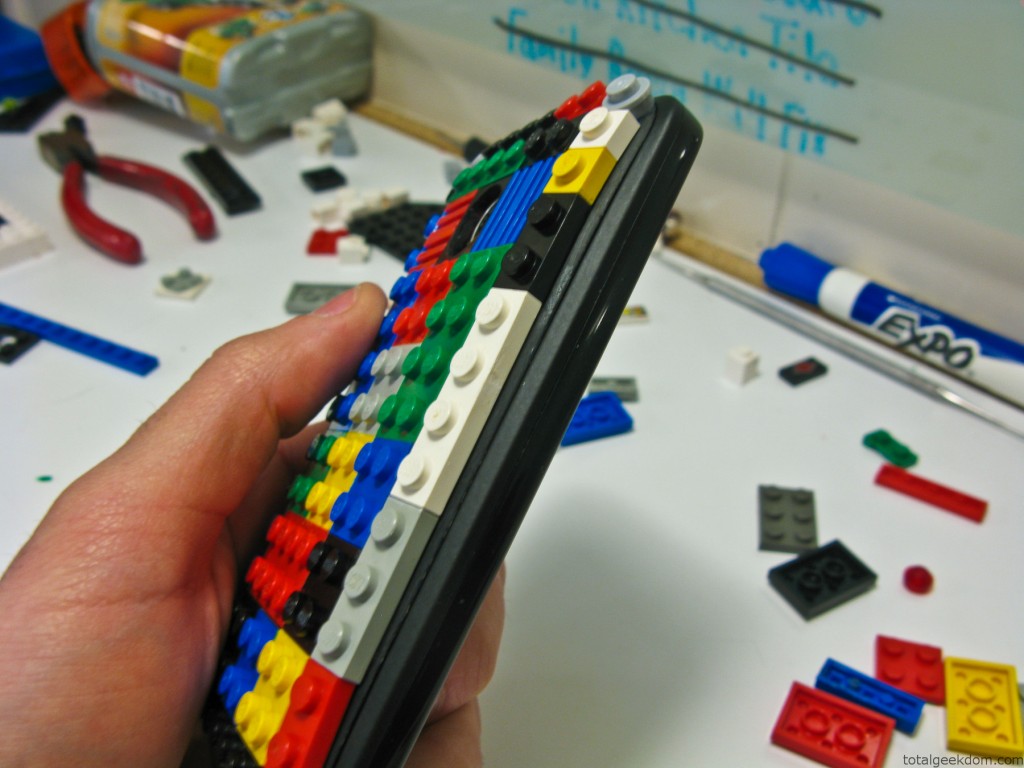 I worked my way around the entire cover, and piece by piece, I managed to cover the entire battery door. Using some smaller pieces I was able to accommodate the changes in curvature around the door. It worked out pretty well. In the end I’m pretty happy with how this project turned out. If I were to do a second one I would make some small changes, but this ended up being a great learning experience and a fun project. I already mocked up black/white Evo version that I kind of liked, but I think I will stick with the multi-color version for a while. It does not make the phone much thicker, plus I like the tactile feel in my hand. The camera lens is protected and the plastic of the Legos is pretty darn durable. 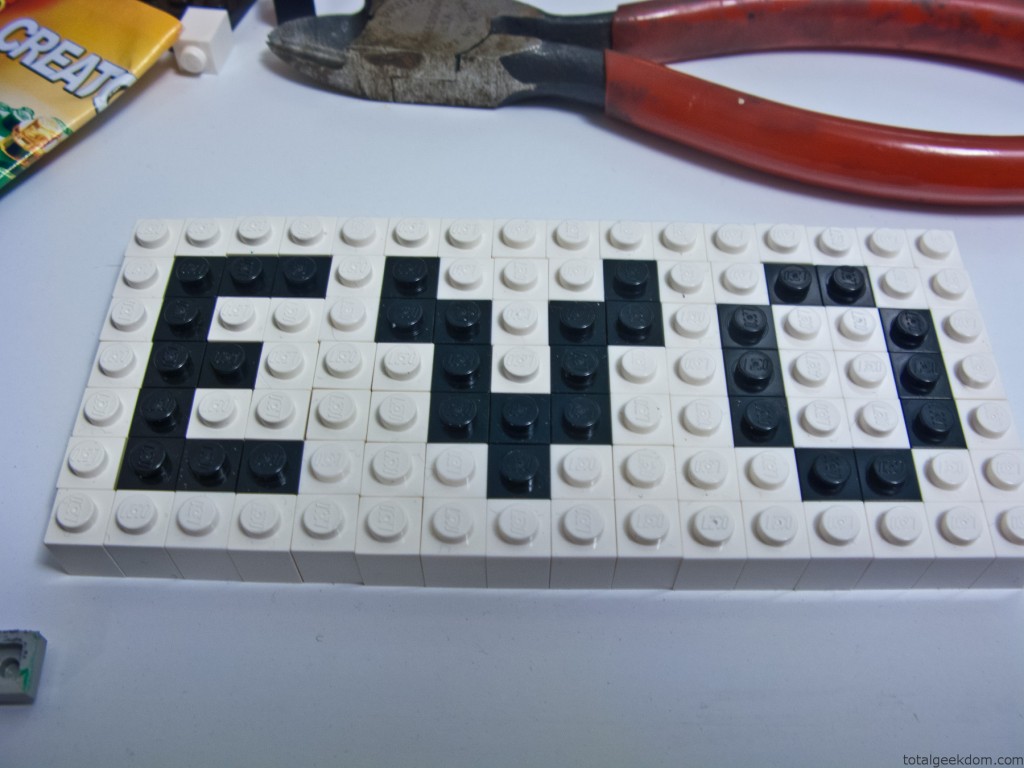 I’ve had the cover modded for one day now and I’ve had numerous people tell me how cool they thought it was. In the end I’m just glad I found I way to combine my passion for Lego and gadgets.