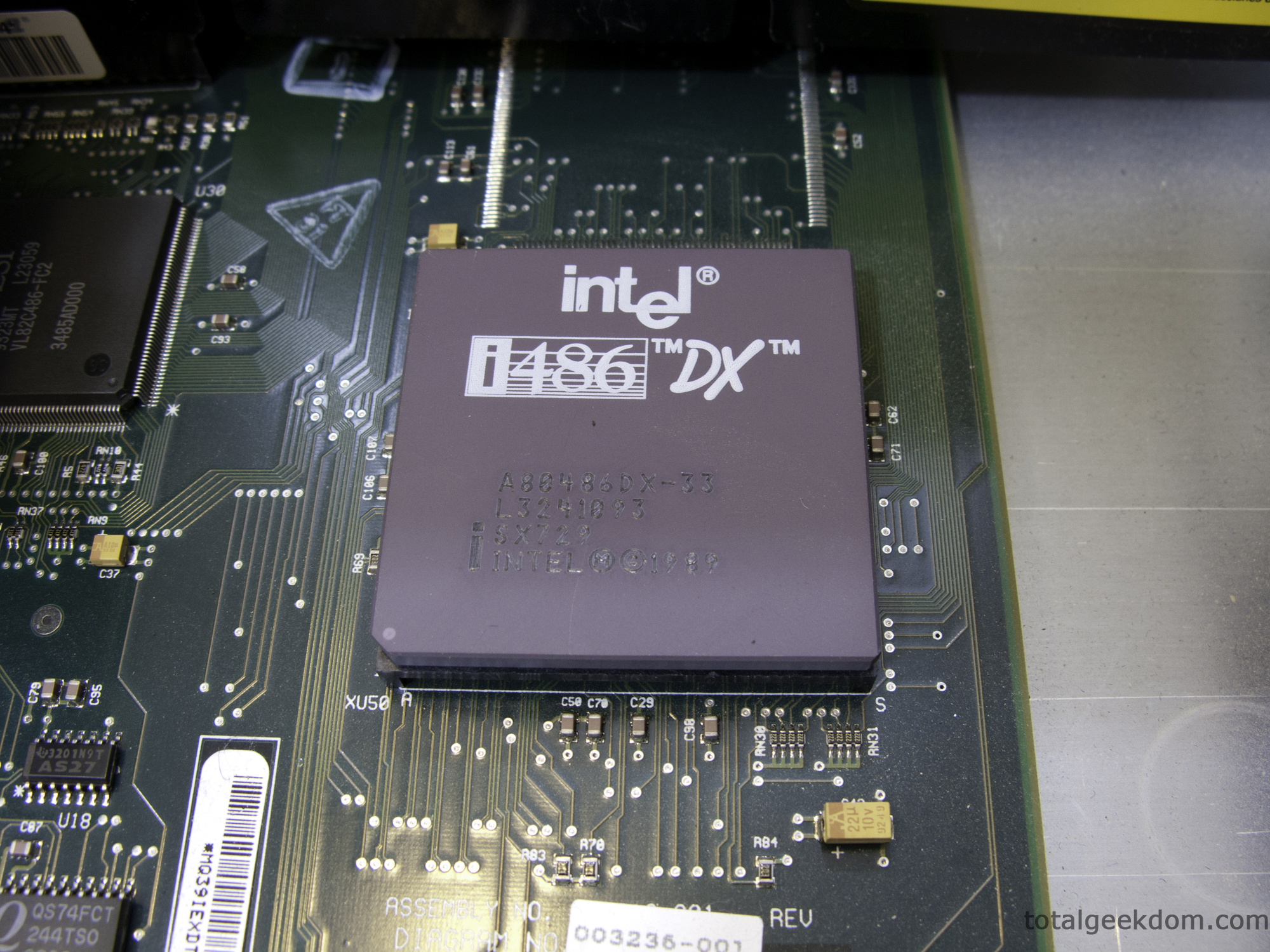 I was recently gifted a truly rare gem. A near perfect condition Compaq Presario 4/33 desktop computer from the early 90s. The word gifted might not be appropriate, as the computer was on its way to the garbage, and I quickly offered to take it and make good use of it.

As I stared at the computer my mind filled with all kinds of wonderful geeky project ideas. After some initial deliberation I chose one and prepared to get underway with the modding. When I picked the computer up and looked at it closer, I started to feel some hesitation. There really was not any sentimental value to me, but I still felt an odd sense of restraint when it came to digging in.

(I originally researched and wrote this post in 2011, so it’s out of date as it’s almost 2015 now. However, since I thoroughly enjoy hardware and the associated tech I’ve gone ahead and updated sections of the post to reflect current hardware. I’ve added date tags to the various benchmark results throughout this article to help identify the years and associated hardware.) 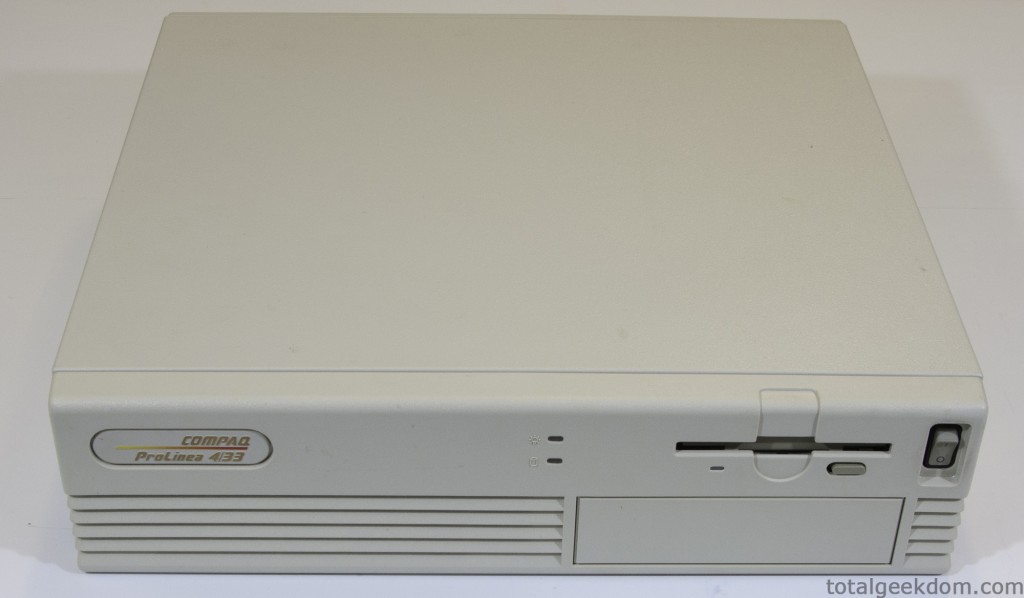 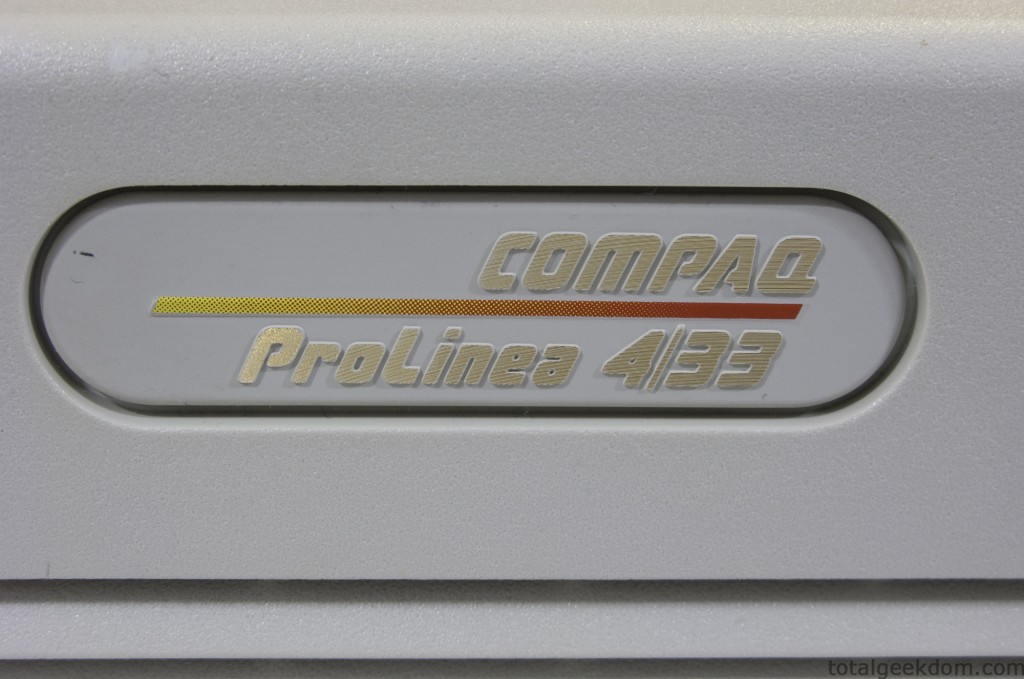 I decided to just take the computer apart and have a peek under the hood. I was pretty curious as to what lay underneath. I’ve taken apart a lot of computers since I first started tinkering, but this one was a little before my time. Naturally I was quite curious. That’s when it hit me, if I was this curious and excited about what was inside, then I was sure there were others like me that had not seen the insides of an older computer.

Pretty much every new computer, gadget, phone, etc. over the last 5 years has been disassembled by numerous different websites and dissected to the nth detail. When I searched online for computers of the 90’s teardowns I came up with very little, so I decided to do a detailed teardown myself.

In the process of taking the computer apart I saw some things with which I was not familiar. I decided to do some research to educate myself on these new/old pieces of tech. It was odd to consider, while I researched the parts on the internet, that at the time the machine was built the internet was only in its infancy.

Any geek out there can quickly identify most of the modern components that go along with computer technology of today. PCI-express slots, USB headers, SATA ports, etc. But none of these technologies existed back then. PCI slots were not even standard yet, serial ports were the preferred external data link and hard drives still used giant ribbon cables and early IDE interfaces.

Some of the first things I noticed when I pulled back the case cover were standard issue pieces. Motherboard, power supply, hard drive. The modem looked slightly different then what I had remembered and it was connected to some sort of add-on card which attached to a single slot on the motherboard. 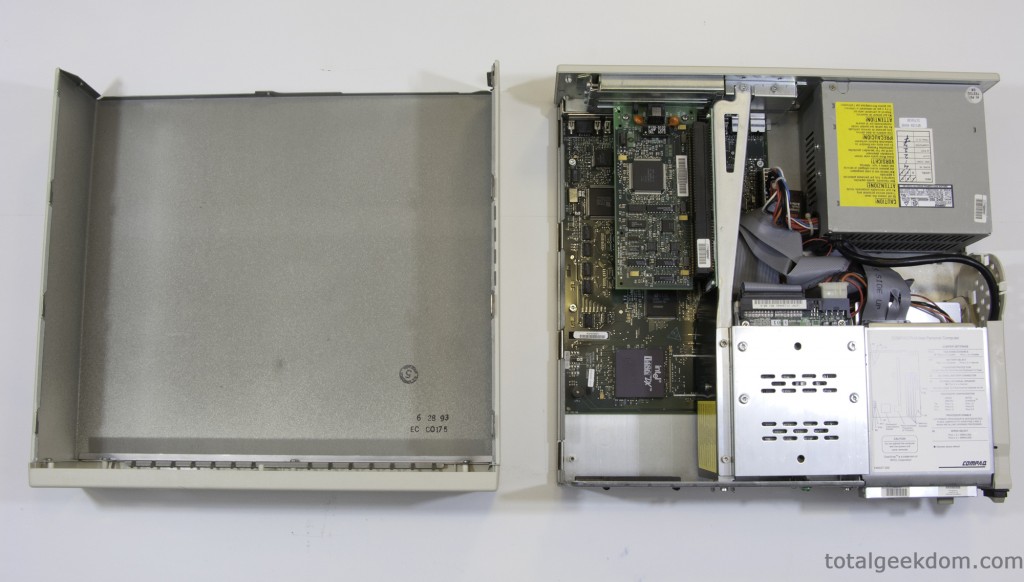 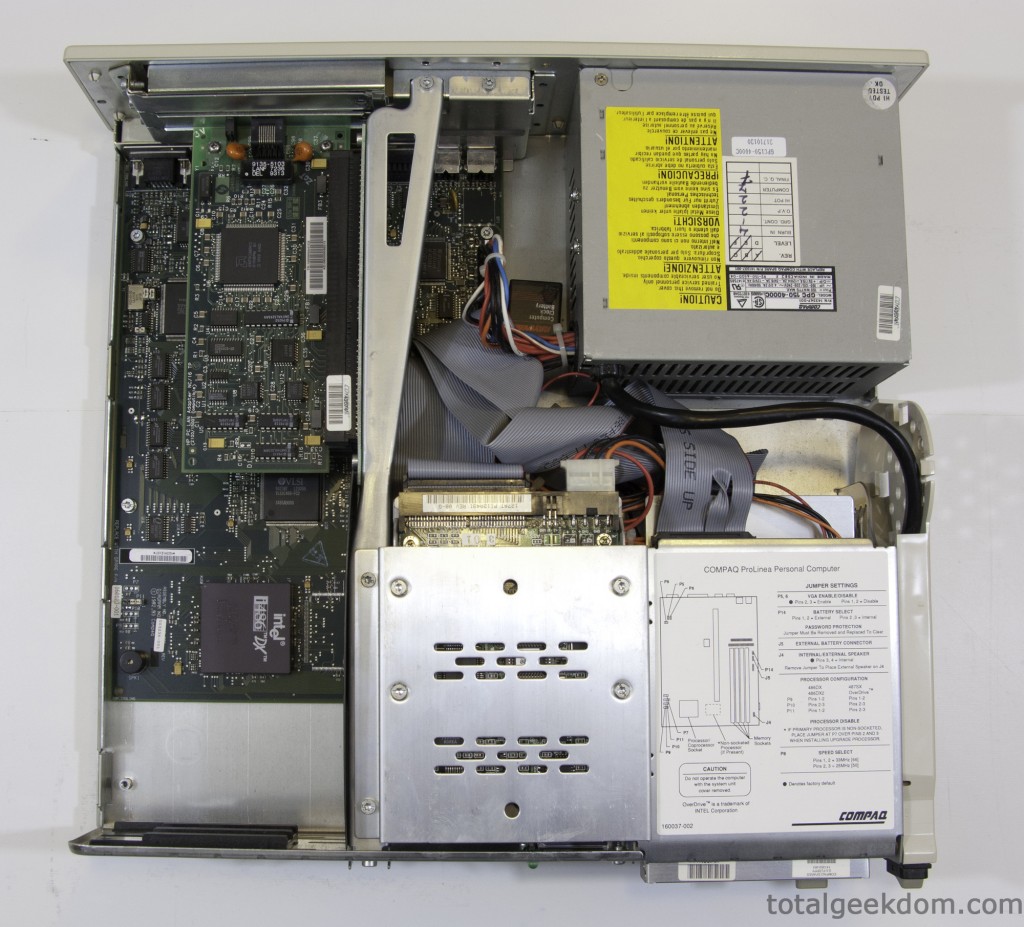 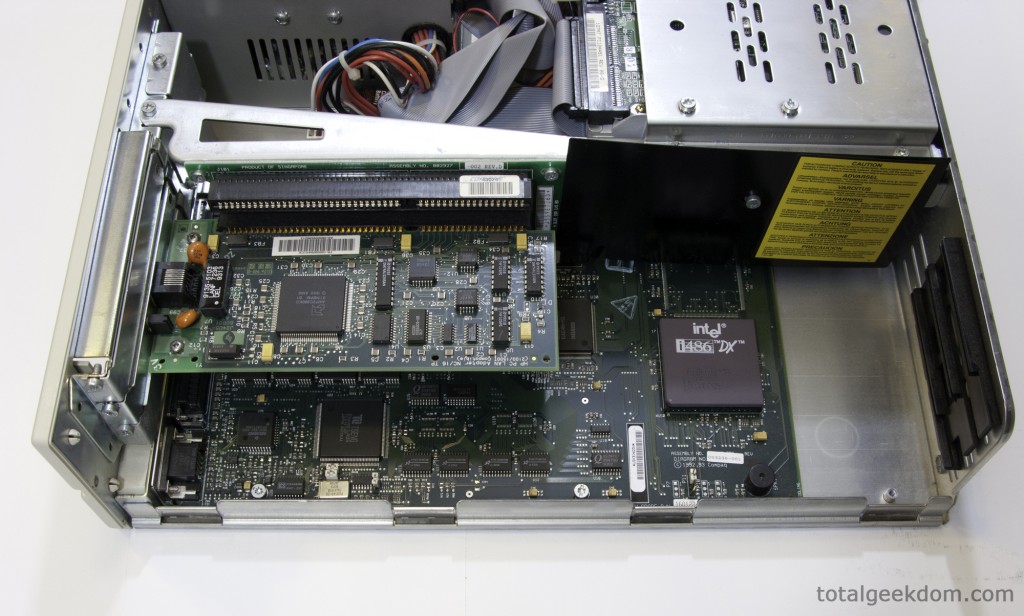 The processor was an Intel 486DX running at 33mhz. The board looked to have about 20MB of RAM via two sticks plugged into 2 of the 4 slots available plus 4 DIP pieces mounted directly to the board. As I pulled the hard drive I was a little shocked when I read the capacity was 120MB. I did a double take. MBs? Wow, shows how programmed I’ve become to expect GBs on hard drives. Thinking of a 120MB hard drive was a time warp for sure. My phone has 512MB RAM, illustrating that it’s definitely a different tech world now.

The more I dug into my new best pal the more interested I became in the system architecture and the processor technology of the era. The RAM type was something I was not familiar with, and I was quite confused still about the NIC (Network Interface Card) plugged into the add on board. Here is what I found after further research:

To put this in perspective in today’s world-

An easier measurement for comparison sake would be SuperPI (Super PI is a computer program that calculates pi to a specified number of digits after the decimal point – up to a maximum of 32 million digits) The time it takes for the processor to complete this calculation is a somewhat if obscure measure of how “fast” the processor is.

I knew this would be a landslide victory going in, but its still interesting to see the numbers behind how much “faster” the modern CPU is as compared to the old. 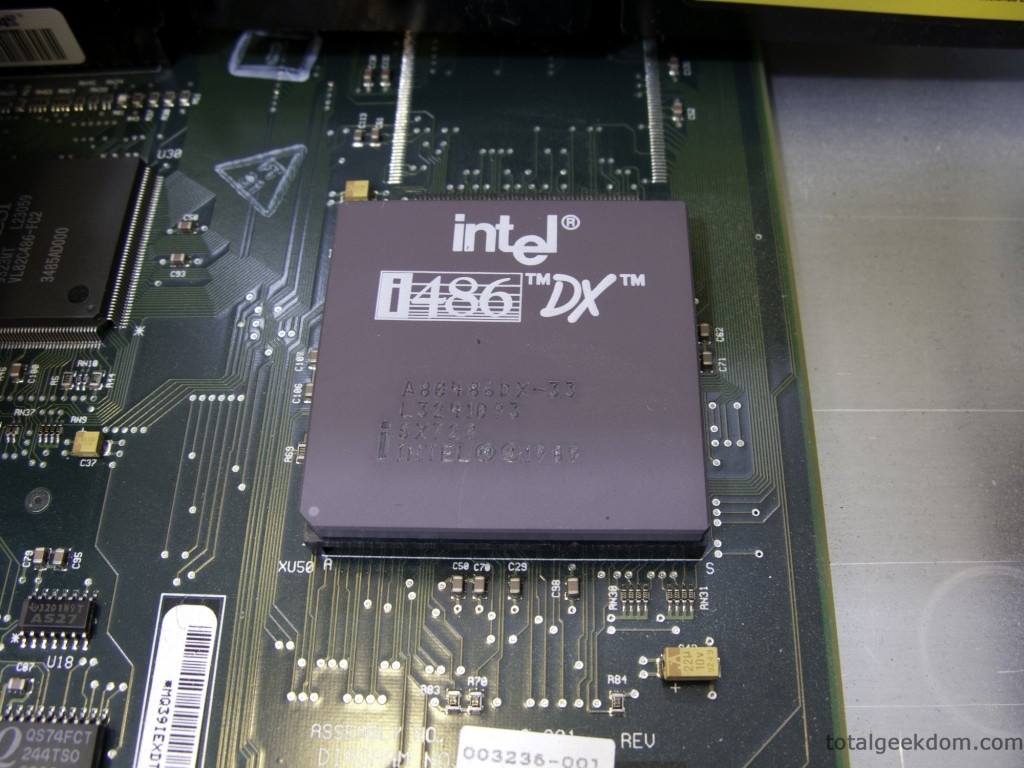 Next up I wanted to look a little deeper into the hard drive. I was still coming off of my sticker shock when I read the label and saw 120MBs. I wanted to get at more details of the drive performance next.

The drive in the computer is a Quantum Prodrive ELS. Not really sure what happened to Quantum but it’s definitely not a name I’m familiar with when it comes to modern consumer hard drives.

Now for the numbers of the modern mechanical and SSD drives 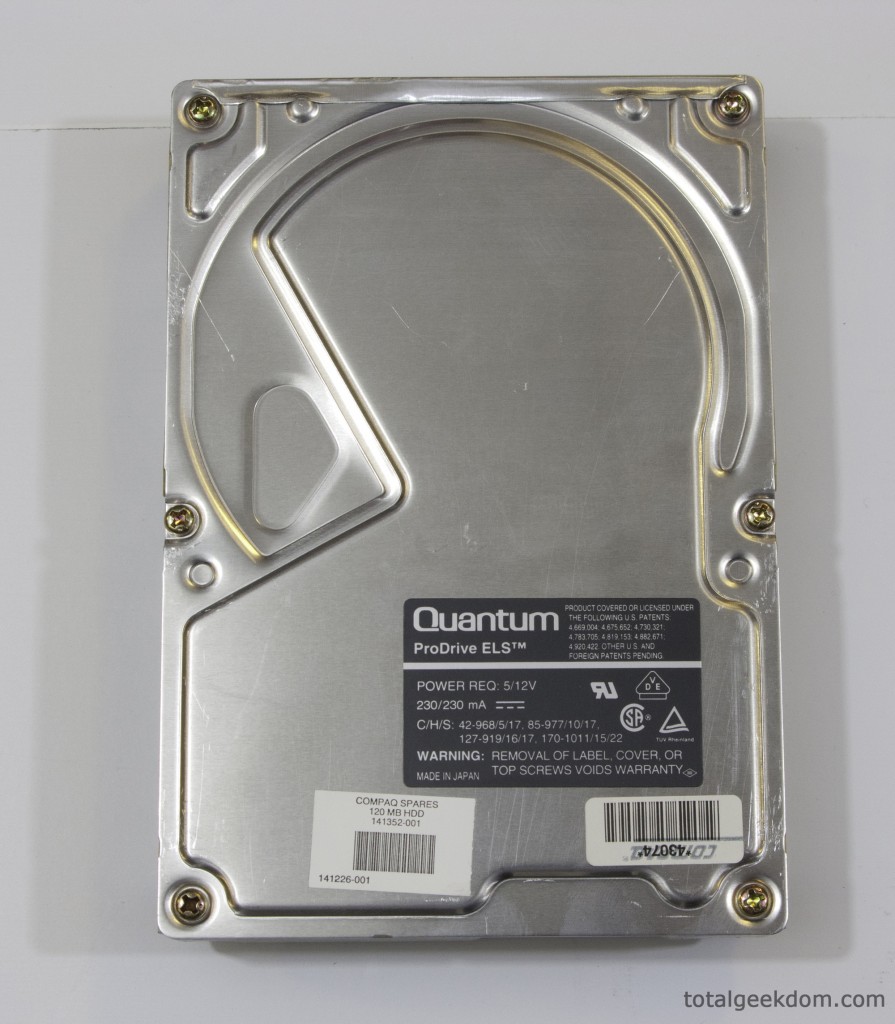 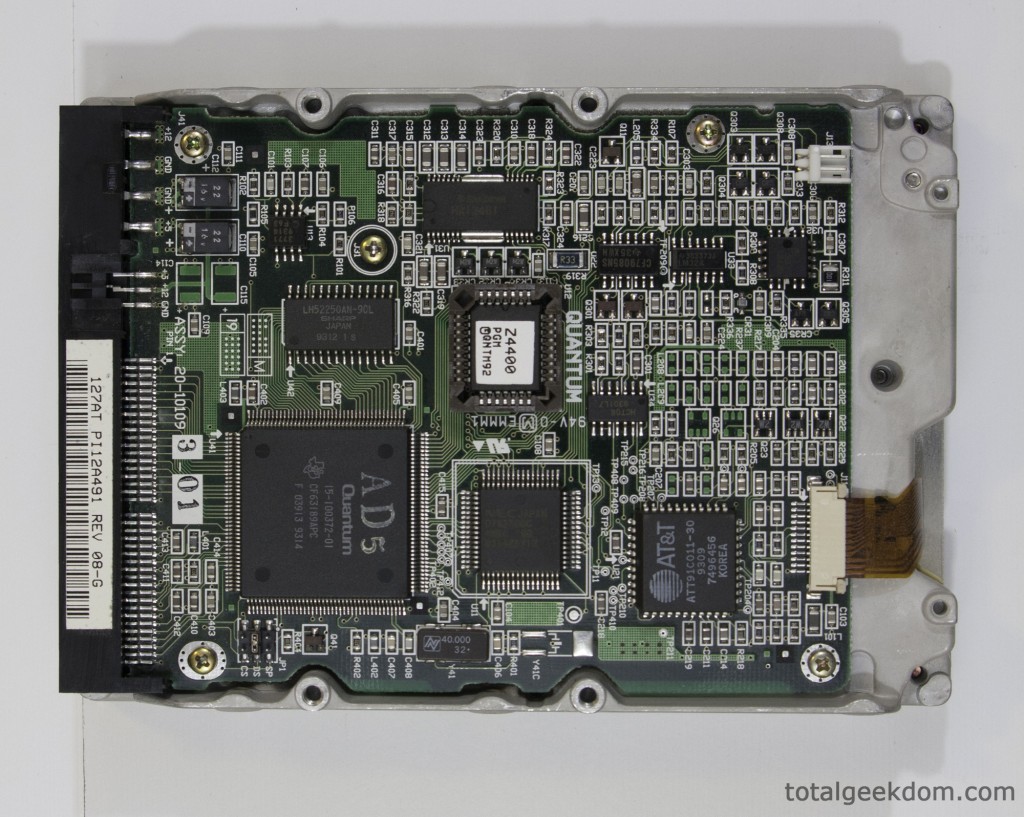 Again by just looking at the numbers, its a landslide victory. But that was to be expected. The mechanical limits of the hard drives seem to result in a fairly similar read access time. I was somewhat surprised by this. Also the power consumption is really not all that much better.

Most modern hard drive benchmarking is directed towards IOPS (Input/Output operations per second). Unfortunately that kind of data is hard to find for the old drive.

As expected the amount of memory in the system was paltry in comparison to today’s memory standards. The two SIMM modules have a total of what looks to be 20MB, with one stick having eight single 1MB chips and the other stick having twelve 1MB chips. Most systems today utilize 6GB to 8GB of ram as a standard and a lot of high-end systems utilize 12GB to 16GB. I believe there may also be 4MB of RAM in the form of 1MB DIP modules soldered onto the motherboard. Deciphering those part numbers was a bit harder, as I had trouble finding any information at all.

Computers in today’s world commonly have 400 times as much memory as this Compaq machine did. I wanted to look at little further at the type of memory. Memory today is commonly DDR3 SDRAM. This stands for Double Data Rate Synchronous Dynamic Random Access Memory. That’s a mouthful.

The memory used in this system is SIMM FPM (Fast Page Mode) This type of memory is DRAM which uses an asynchronous interface. This is opposite of how modern day SDRAM works with its synchronous interface which waits for a clock signal before responding to control inputs. This is what makes it synchronized, since it’s synchronized with the computer bus system. SRAM has a more complex state of operation than DRAM which enables higher speeds.

From a performance aspect the changes are numerous; more bits, more lanes, frequency increases, etc. A modern day high speed DDR3 module has a peak transfer rate of 17,000+ MB/s. Compared to the SIMM FPM in this system which has a 176MB/s peak transfer rate. Again the difference is stunning. Modern day DDR3 has roughly 97 times the bandwidth of the older SIMM Async DRAM FPM. Flash forward (pun intended) to 2014 and we find the introduction of DDR4 which at higher speeds is capable of almost 50,000MB/s bandwidth. 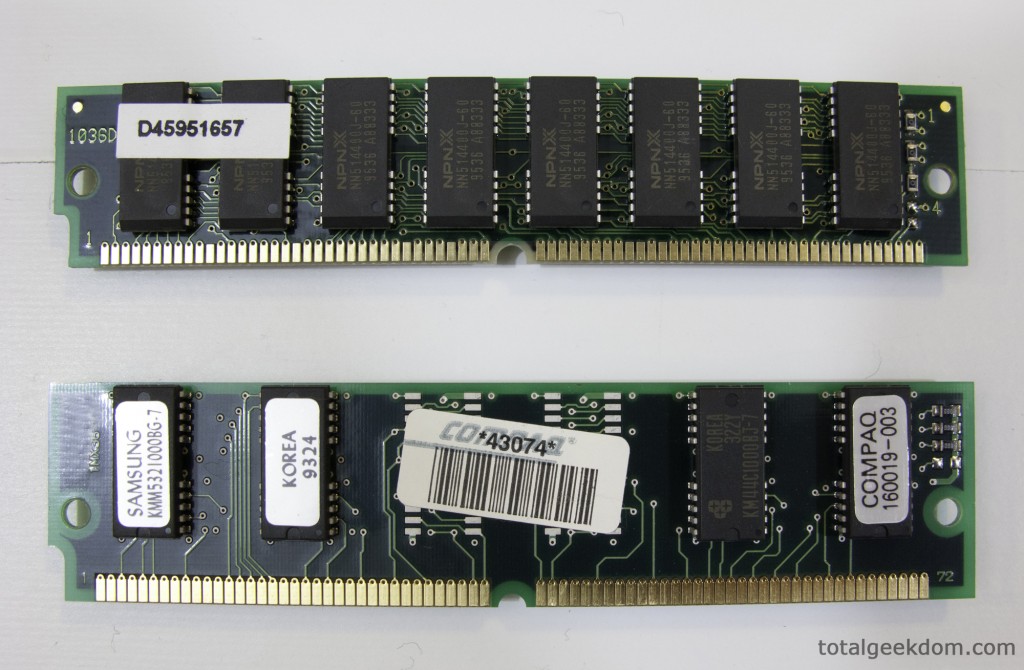 I finally got back around to looking at that add-on card that was plugged into the motherboard. I remembered back to the days of PCI slots and AGP slots for graphics cards but this slot was different. After some digging I found that the add-on board offered 3 additional ISA slots for expansion.

The ISA interface was common up until the mid 90’s until it was phased out for PCI slots. The main advantage of course in the PCI interface was bandwidth. There have been a lot of changes since then though. Here is a breakdown of the speeds of some of the notable interfaces that have come into existence since then.

There have been numerous interface types over the last 15 years, with each subsequent revision bumping up the bandwidth. The current PCI Express 3.0 interface offers roughly 4000 times more bandwidth then the ISA. Wow! I would say that means you’re not going to be playing any Assassin’s Creed or Halo on this system.

I was totally expecting to see the old Compaq get blown away in comparison to a new modern system. I was not let down at all in that respect. When you start looking at the hard numbers though and see the astounding factor by which the old specs get blown out of the water it’s still kind of a shock. While 15 years feels like a short period of time it’s quite obvious that its more like light years when it comes to computer technology. 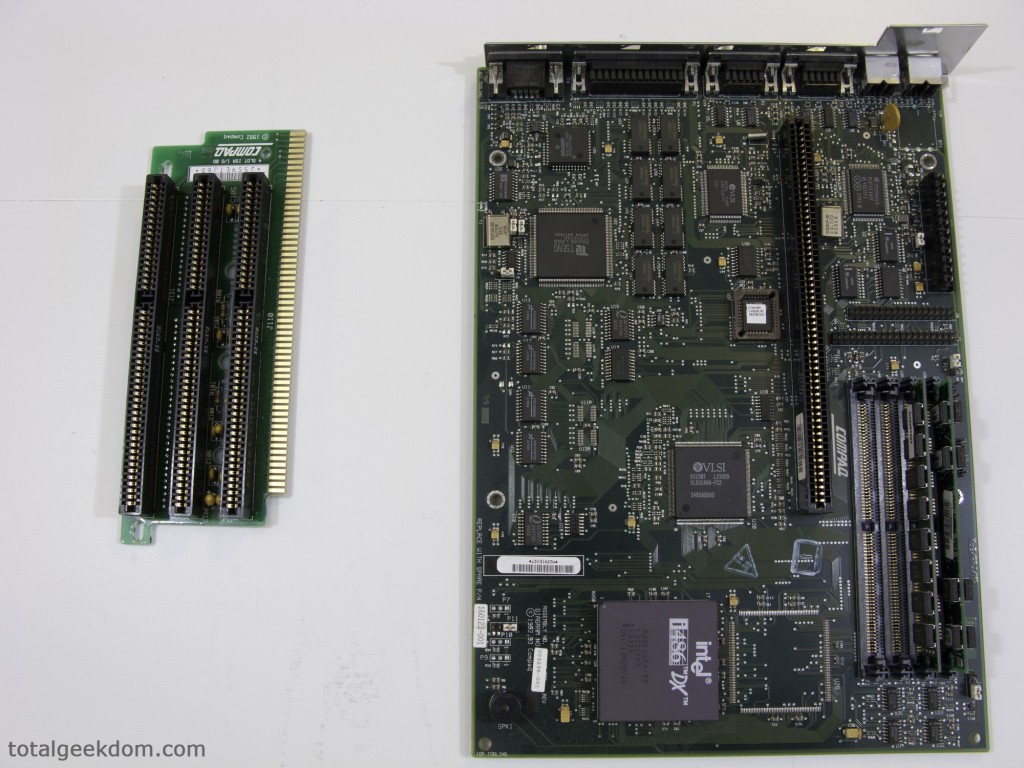 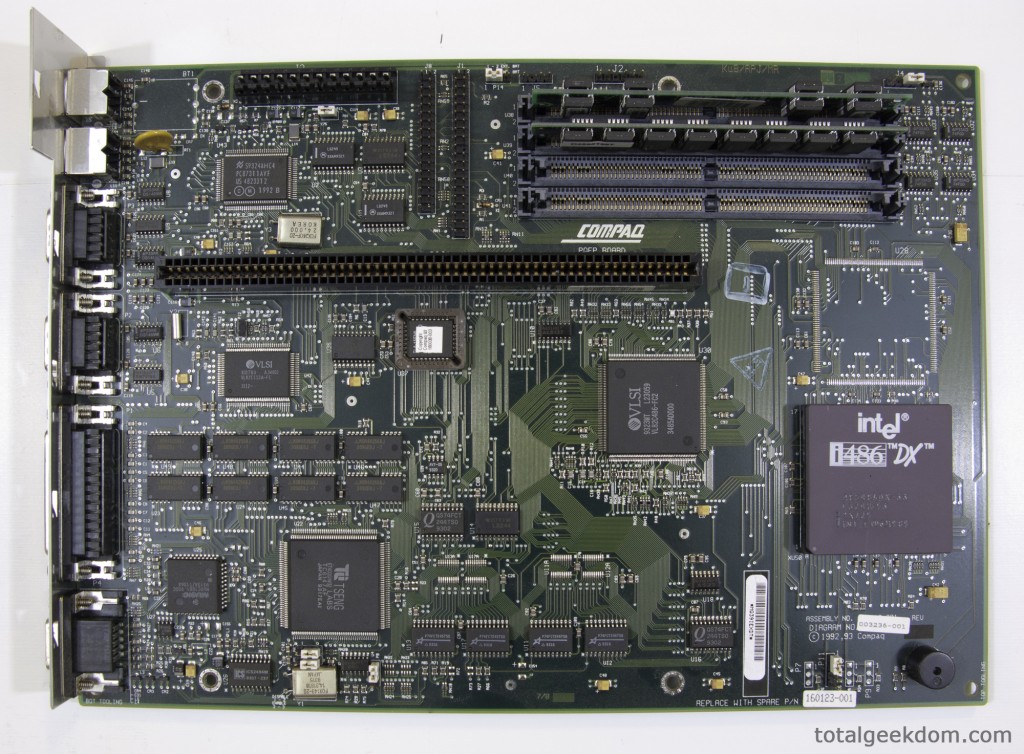 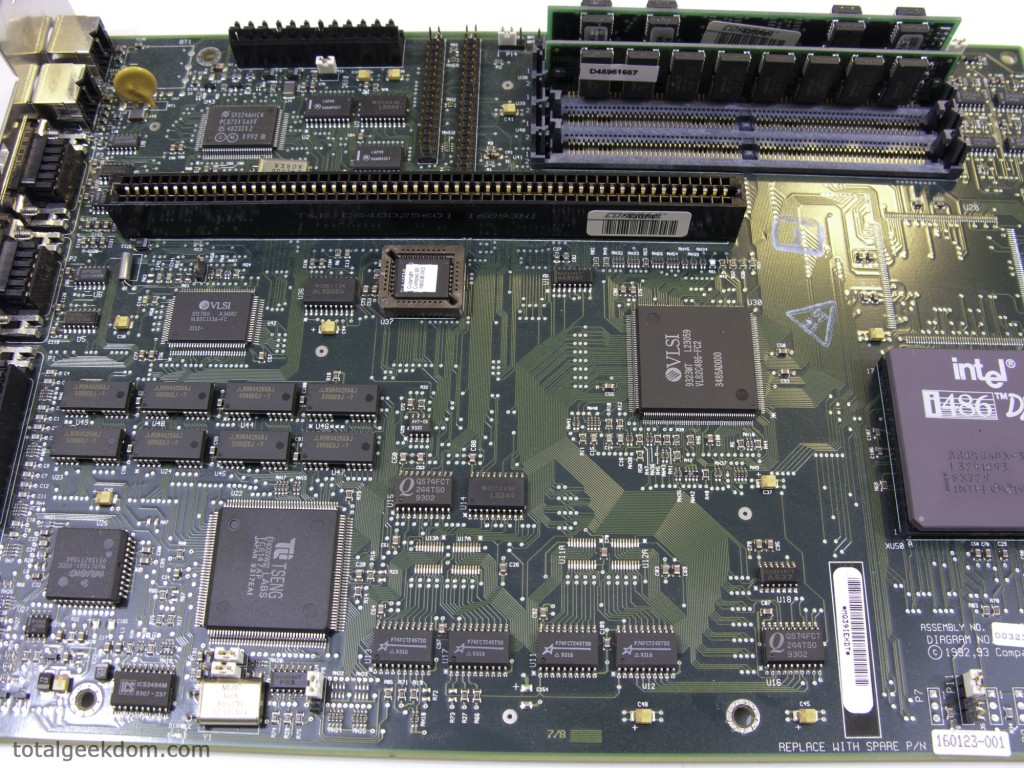 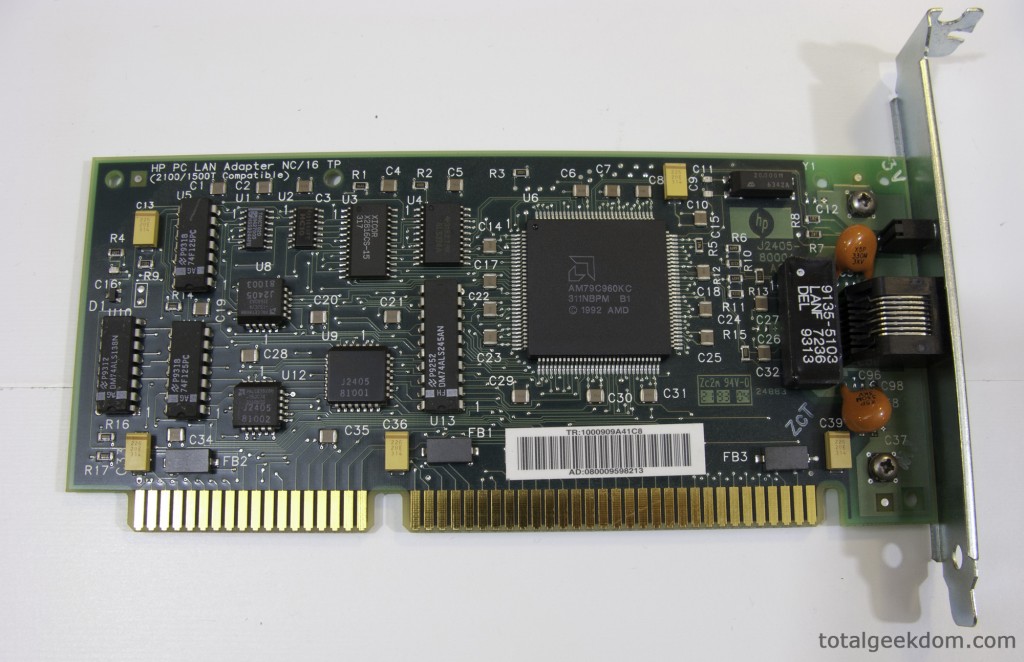