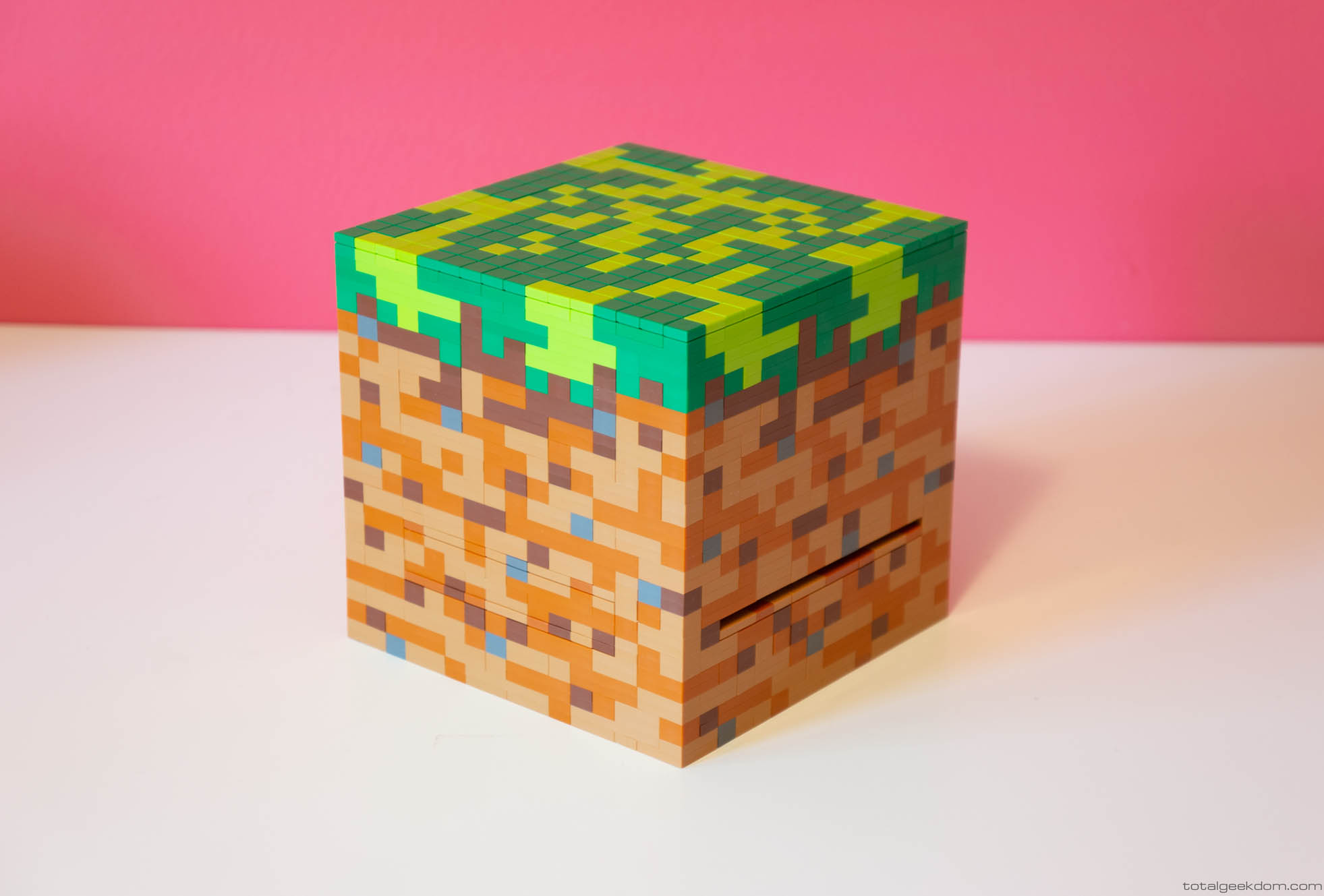 You’d be hard-pressed to find two geeky pastimes that complement each other better than Lego and Minecraft: Minecraft offering an endless virtual environment to build your world one block at a time, and Lego offering a real world equivalent. It’s not surprising in that case that one of the more common requests I receive for Lego-based computers are around some type of Minecraft theme.

Earlier this year I received one of those very requests, and this time that request came from Intel. They were co-sponsoring the Minefaire shows and wanted to debut their yet-to-be-released 8th Gen NUC computer system in their booth. The main requirement they had was that they wanted the systems to be unique and also Minecraft themed.

After some initial work on designs, I suggested using the iconic Minecraft Grass block as a case for the new NUC computer. Nothing says Minecraft more than a pixelated block of grass and dirt, and to meet the requirement of making it unique I’d build the case completely from real Lego. This would create a fully functional and working NUC based computer system, housed in a real Lego case made up of almost 1000 pieces of Lego.

The first step in creating this Lego Minecraft computer was building out some test models in digital format. From there, I went to work on creating some real life mock-ups to test out what Lego colors would most closely match the color pattern of the Minecraft grass block. After tinkering with the design, I realized that the only way to precisely match the form factor needs of the computer, while perfectly capturing the Minecraft block dimensions at scale, was to use plates to make the individual “blocks” that make up a Minecraft block. It would have been much easier to just use 1×1 blocks as that foundation, but it didn’t look right at small scale. My thumbs would later regret this decision about 8,000 or so Lego plates later (did I mention I needed to build 10 identical systems for Intel?) but in the end it was worth it!

The Lego case perfectly wraps around the NUC system, and allows access to all ports in the rear of the system. Additionally, slots were built into the sides of the case which allow for the normal NUC cooling system to function as designed, with fresh air being drawn in through the sides and then expelled out of the rear of the system. Also, I built these slots to incorporate the built-in card reader slot, which allows the case to not impact the cooling performance in any way, as the system, when tested, runs at the same temperatures as a completely unmodified NUC system.

I had fun playing around with the design and finding the perfect colors and pattern to emulate the Minecraft Grass block. In total I built 10 of these systems for Intel to use at various shows. They utilize 8th gen NUC systems, with 5 of them being built around an i5 system and 5 based on an i7 system. It took about 10,000 Lego plates to get all 10 systems built, but I’m really happy with how they turned out and Intel loved them.