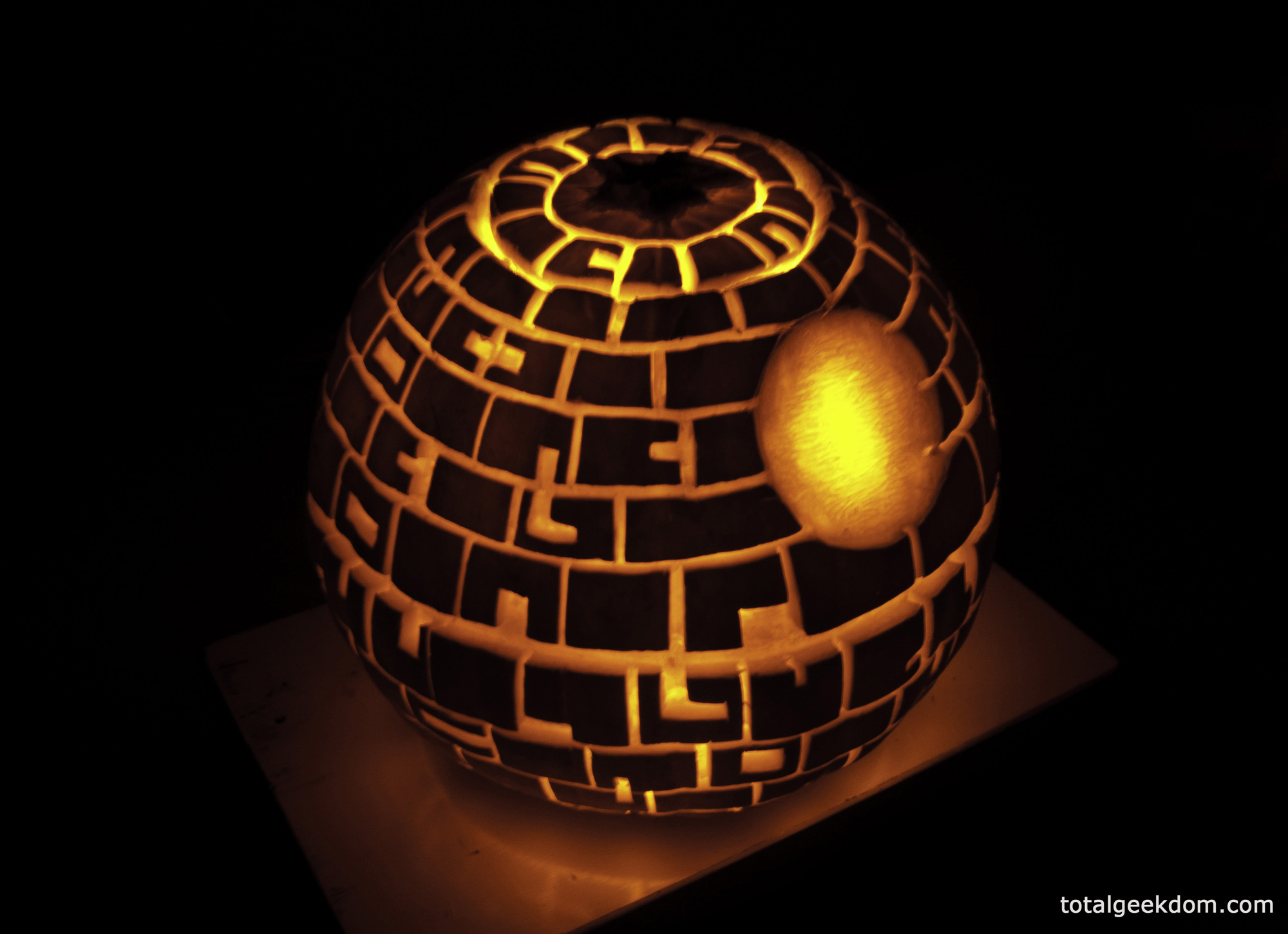 The true essence of Total Geekdom gets summed up pretty easily right here. The Death Star, in pumpkin form.

I decided this year to go a different route with the pumpkin carving and go a little non-traditional. What better choice then the Death Star. It made my geek heart melt when I first saw it somewhere on the internet. I decided to go for it and give it a shot.

With help from a wonderfully informative website http://www.fantasypumpkins.com/carving-the-deathstar.htm I was able to get the basics down about how it was supposed to work. I ended up getting a smaller pumpkin than I originally had planned, but in the end I was still happy with the result.

It took me about 10 hours total to complete. I made some mistakes, and was nowhere near as precise as I would have liked to be doing it, but because of an impeding party deadline I had to rush through it.

Traditionally I had seen it done with candles and an air-hole, but I didn’t want to cut a hole in it for air. I decided instead to add some good ol’ Edison powered light to it. I found a light fixture in my garage and carved the necessary hole to make it all fit. At first I tried an incandescent bulb but found that it got the Death Star a little too close to a real death. It seemed that the exhaust port would prove to be fatal for my pumpkin Death Star if I could not get the excess heat out. Exhaust ports seem to cause problems for Death Stars no matter the scale or medium…

Anyway, I thought this was perfect for a CFL, which produces little heat and a small form factor. It worked perfectly! I dubbed it the Eco-Death Star. With all that planet destroying power at your disposal it’s always important to watch your energy costs. 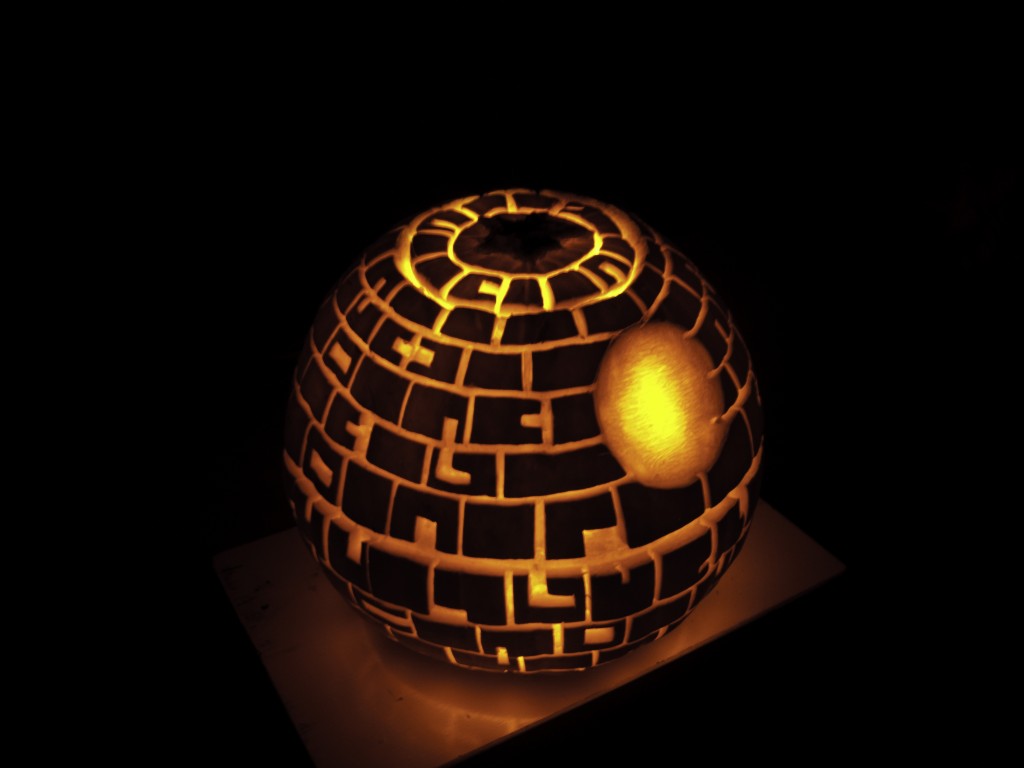 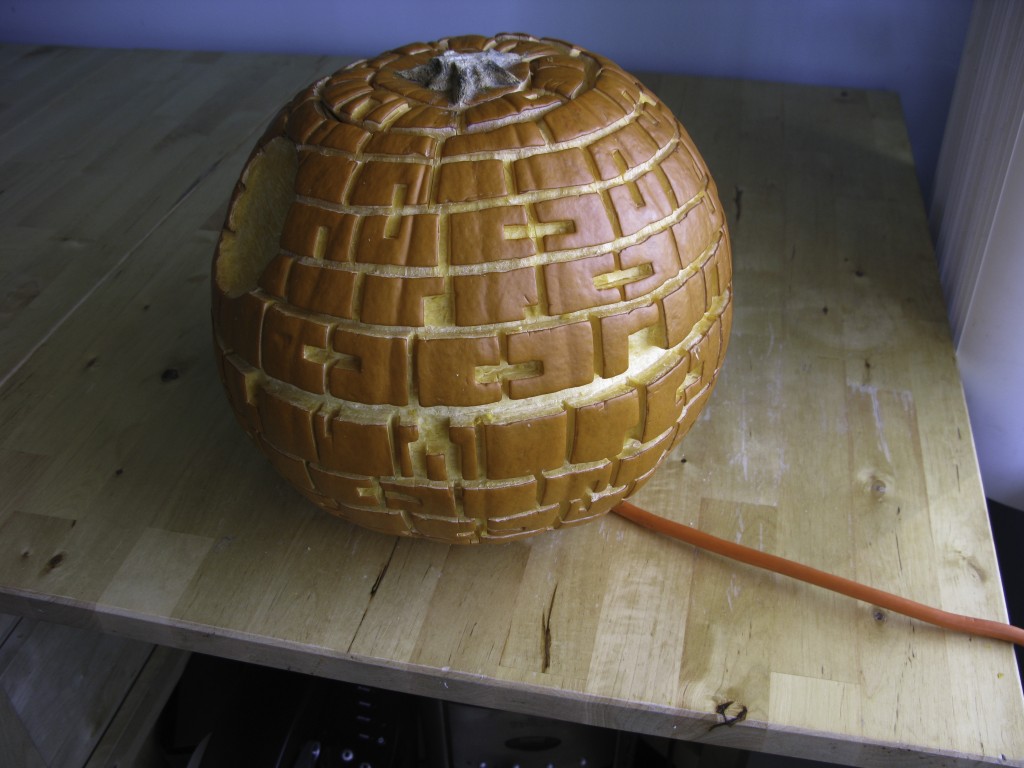 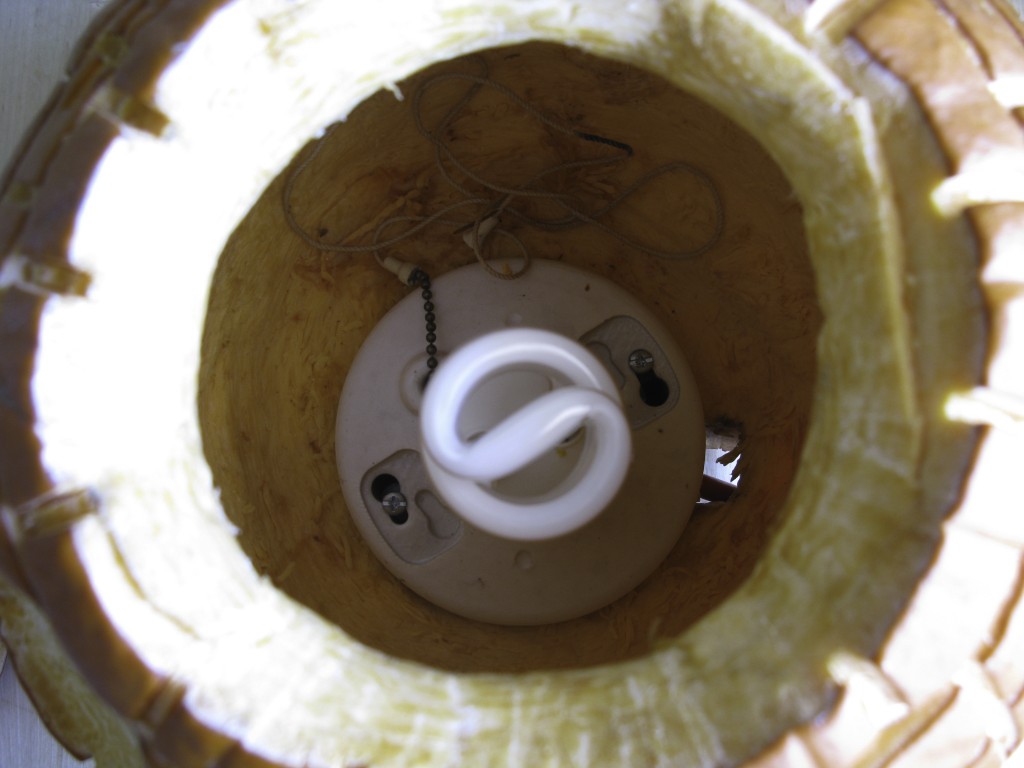 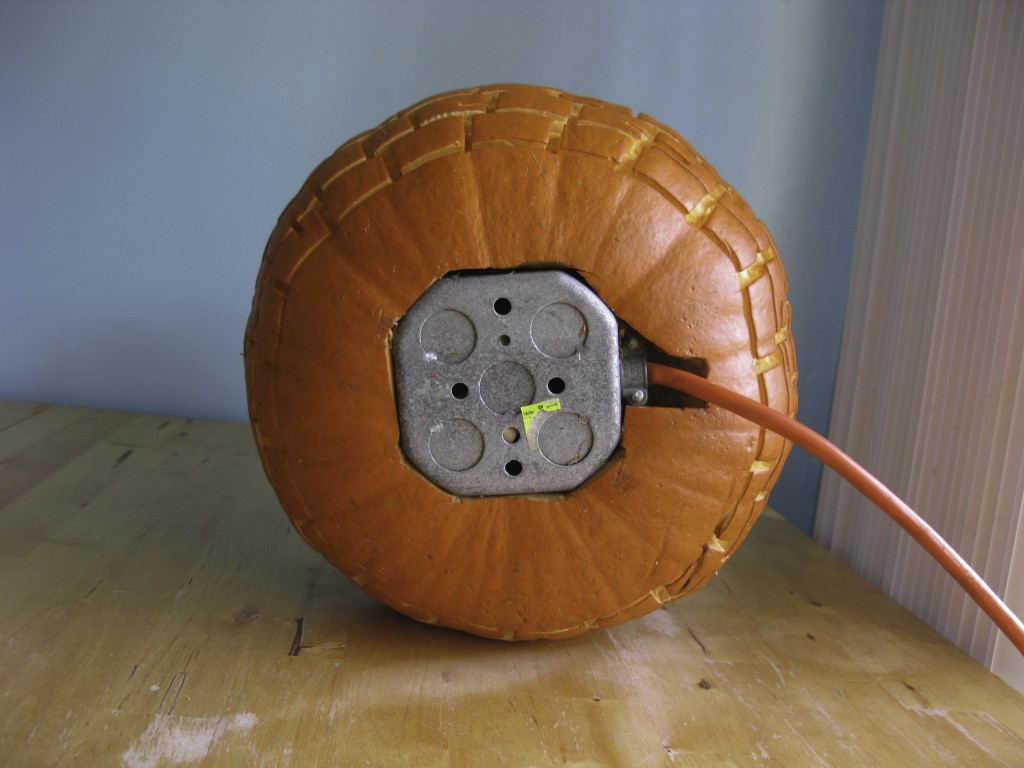 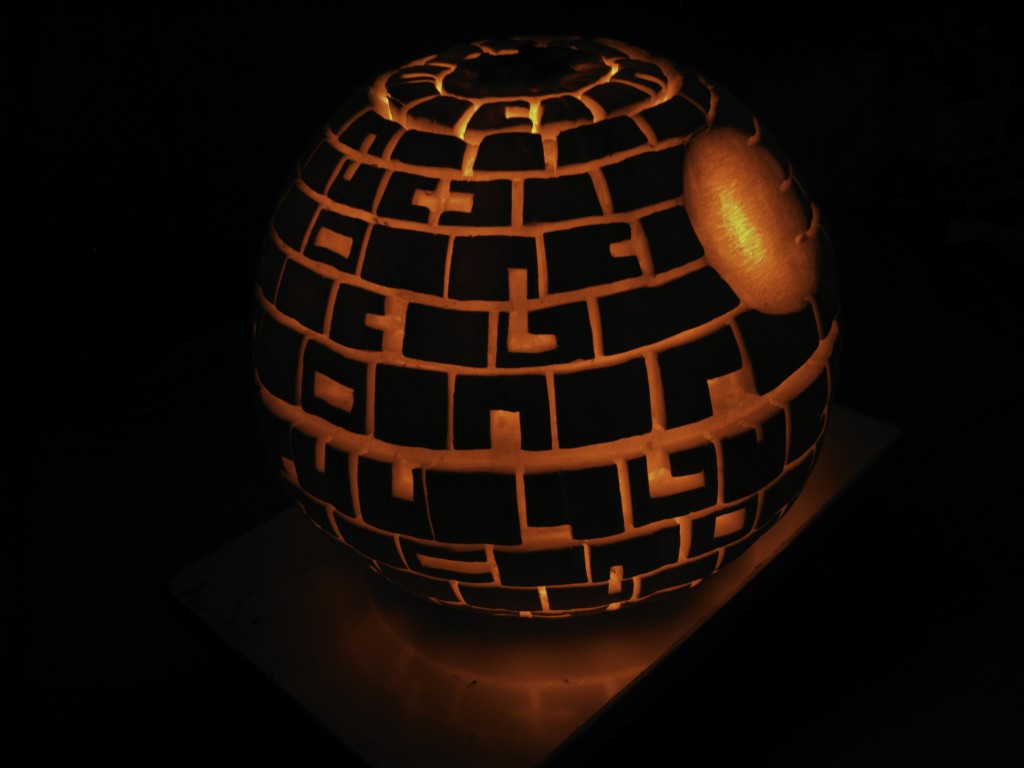 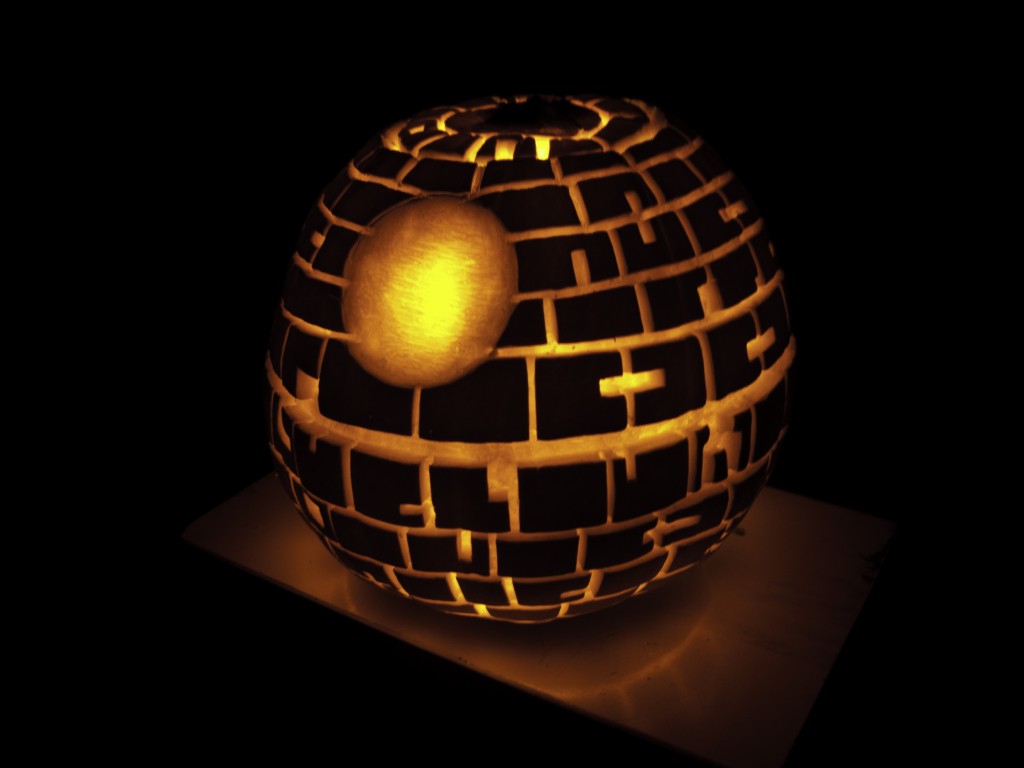